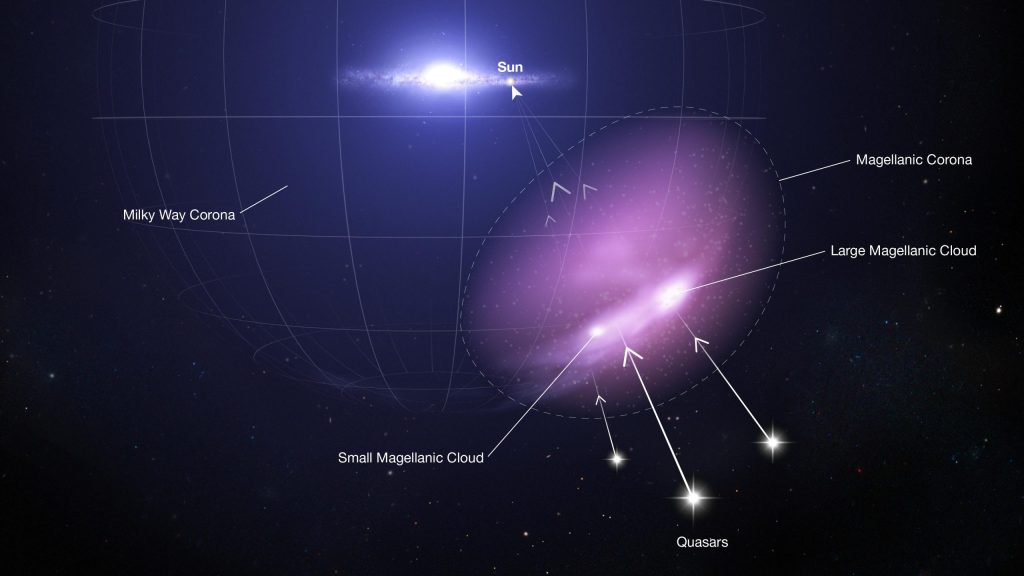 voor miljarden jaren,[{” attribute=””>Milky Way’s most massive cosmic companions – the Large and Small Magellanic Clouds – have been on a tumultuous journey through space, orbiting one another while being torn by the gravitational pull of our own galaxy.

Recent theoretical predictions indicate that these dwarf satellite galaxies must be protected by a pervasive shield that prevents the Milky Way from removing their essential star-forming gas. This so-called Magellanic Corona, made of supercharged gas with temperatures of half a million degrees, would act as a sort of cosmic crash zone around the Magellanic Clouds, keeping the disk and stars relatively unscathed during collisions. Even though simulations show that the Magellanic Corona should exist, observational evidence has remained elusive.

Using a combination of the unique ultraviolet vision of the Hubble Space Telescope and the Far Ultraviolet Spectroscopic Explorer, along with the probing power of distant quasars, astronomers have finally been able to detect and begin to map the Magellanic Corona. The discovery of this diffuse halo of hot gas, extending more than 100,000 light-years from the Large Magellanic Cloud and covering much of the southern sky, confirms the prediction. It also illuminates our understanding of how small galaxies can interact with larger galaxies without losing the fuel needed for future star formation.

Nearly 200,000 light-years from Earth, the Large Magellanic Cloud, a satellite galaxy of the Milky Way, floats in space, in a long and slow dance around our galaxy. As the Milky Way’s gravity gently tugs on its neighbor’s gas clouds, they collapse to form new stars. In turn, these light up the gas clouds in a kaleidoscope of colors, visible in this image from the NASA/ESA Hubble Space Telescope. Credit: NASA, ESA, Acknowledgment: Josh Lake

For billions of years, the Large and Small Magellanic Clouds – the Milky Way’s largest satellite galaxies – have followed a perilous journey. Orbiting one another as they are pulled in toward our home galaxy, they have begun to unravel, leaving behind trails of gaseous debris. And yet these dwarf galaxies remain intact, with ongoing vigorous star formation, leaving astronomers baffled.

“A lot of people were struggling to explain how these streams of material could be there,” said Dhanesh Krishnarao, assistant professor at Colorado College. “If this gas was removed from these galaxies, how are they still forming stars?”

A team of astronomers led by Krishnarao has finally found the answer, with the help of data from NASA’s Hubble Space Telescope and a retired satellite called the Far Ultraviolet Spectroscopic Explorer (FUSE), They discovered that the Magellanic system is surrounded by a corona, a protective shield of hot supercharged gas. This cocoons the two galaxies, preventing their gas supplies from being siphoned off by the Milky Way, and therefore allowing them to continue forming new stars.

This discovery, which was just published on September 28 in the journal Nature, addresses a novel aspect of galaxy evolution. “Galaxies envelope themselves in gaseous cocoons, which act as defensive shields against other galaxies,” said co-investigator Andrew Fox of the Space Telescope Science Institute in Baltimore, Maryland.

Several years ago, astronomers predicted the corona’s existence. “We discovered that if we included a corona in the simulations of the Magellanic Clouds falling onto the Milky Way, we could explain the mass of extracted gas for the first time,” explained Elena D’Onghia, a co-investigator at the University of Wisconsin–Madison. “We knew that the Large Magellanic Cloud should be massive enough to have a corona.”

However, while covering a huge portion of the southern sky and extending more than 100,000 light-years from the Magellanic clouds, the corona is effectively invisible. In fact, mapping it required scouring through 30 years of archived data for suitable measurements.

Scientists think that a galaxy’s corona is a remnant of the primordial cloud of gas that collapsed to form the galaxy billions of years ago. Although coronas have been seen around more distant dwarf galaxies, astronomers had never before been able to probe one in as great of detail as this.

“There’re lots of predictions from computer simulations about what they should look like, how they should interact over billions of years, but observationally we can’t really test most of them because dwarf galaxies are typically just too hard to detect,” said Krishnarao. Because they are right on our doorstep, the Magellanic Clouds provide a fantastic opportunity to study how dwarf galaxies interact and evolve.

In search of direct evidence of the Magellanic Corona, the research team sifted through the Hubble and FUSE archives for ultraviolet observations of quasars located billions of light-years behind it. Quasars are the extremely bright cores of galaxies containing massive active black holes. Although the scientists reasoned that although the corona would be too dim to see on its own, they thought that it should be visible as a sort of fog obscuring and absorbing distinct patterns of bright light from quasars in the background. Hubble observations of quasars were used in the past to map the corona surrounding the Andromeda galaxy.

By analyzing patterns in ultraviolet light from 28 quasars, the researchers were able to detect and characterize the material surrounding the Large Magellanic Cloud and confirm that the corona exists. As predicted, the quasar spectra are imprinted with the distinct signatures of carbon, oxygen, and silicon that make up the halo of hot plasma that surrounds the galaxy.

Extremely detailed ultraviolet spectra were required to detect the corona. “The resolution of Hubble and FUSE were crucial for this study,” explained Krishnarao. “The corona gas is so diffuse, it’s barely even there.” Additionally, it is mixed with other gases, including the streams pulled from the Magellanic Clouds and material originating in the Milky Way.

By mapping the results, the research team also discovered that the amount of gas decreases with distance from the center of the Large Magellanic Cloud. “It’s a perfect telltale signature that this corona is really there,” said Krishnarao. “It really is cocooning the galaxy and protecting it.”

How can such a thin shroud of gas protect a galaxy from destruction?

“Anything that tries to pass into the galaxy has to pass through this material first, so it can absorb some of that impact,” explained Krishnarao. “In addition, the corona is the first material that can be extracted. While giving up a little bit of the corona, you’re protecting the gas that’s inside the galaxy itself and able to form new stars.”

The Hubble Space Telescope is a project of international cooperation between NASA and ESA (European Space Agency). NASA’s Goddard Space Flight Center in Greenbelt, Maryland, manages the telescope. The Space Telescope Science Institute (STScI) in Baltimore, Maryland, conducts Hubble science operations. STScI is operated for NASA by the Association of Universities for Research in Astronomy in Washington, D.C.