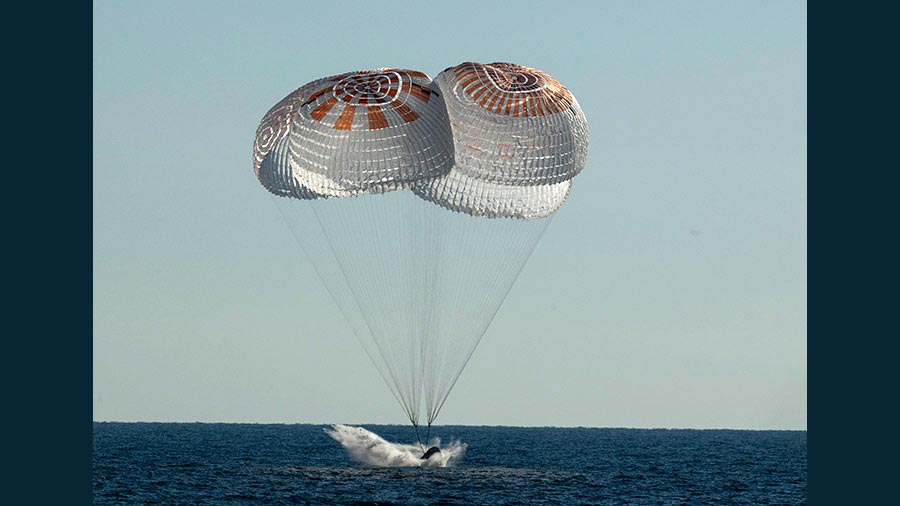 SpaceX Dragon Freedom in the Atlantic Ocean off the coast of Jacksonville, Florida, at 4:55 p.m. EDT after 170 days in space.

NASA’s SpaceX Crew-4 astronauts aboard the Dragon spacecraft safely splashed down Friday off the coast of Jacksonville, Florida, completing the agency’s fourth commercial crew mission to the International Space Station. The international crew of four spent 170 days in orbit.

NASA astronauts Bob Hines, Kjell Lindgren, and Jessica Watkins and ESA (European Space Agency) astronaut Samantha Cristoforetti returned to Earth in a parachute-assisted splashdown at 4:55 p.m. EDT (1:55 p.m. PDT). Teams aboard SpaceX recovery vessels retrieved the spacecraft and astronauts. After returning to shore, all astronauts will fly to NASA’s Johnson Space Center in Houston. Cristoforetti then will board a plane to Europe.

The SpaceX Dragon Freedom crew ship with four Crew-4 astronauts aboard undocks from the space station to begin its return to Earth. Credit: NASA TV

“Welcome home Crew-4! This international crew has spent nearly six months on the International Space Station conducting science for the benefit of all. Their work aboard the orbiting laboratory will help prepare future explorers for future space missions,” said NASA Administrator Bill Nelson. “Working and living on the space station is the opportunity of a lifetime, but it also requires these explorers to make sacrifices, especially time away from loved ones. Kjell, Bob, Jessica, and Samantha, thank you for your contributions over the past six months to science, innovation, and discovery!”

The Crew-4 mission launched at 3:52 a.m. EDT on April 27 on a SpaceX Falcon 9 rocket from NASA’s Kennedy Space Center in Florida. Less than 16 hours later, Dragon docked to the Harmony module’s space-facing port. The astronauts undocked from the same port at 12:05 p.m. Friday, to begin the trip home.

The SpaceX Dragon Freedom crew ship is pictured docked to the Harmony module’s space-facing port where it been parked since April 27, 2022. Credit: NASA TV

Throughout their mission, the Crew-4 astronauts contributed to a host of science and maintenance activities and technology demonstrations. Cristoforetti completed two spacewalks with Roscosmos cosmonaut Oleg Artemyev to perform station maintenance and upgrades.

Crew-4 continued work on investigations documenting how improvements to the space diet affect immune function and the gut microbiome, determining the effect of fuel temperature on the flammability of a material, exploring possible adverse effects on astronaut hearing from equipment noise and microgravity, and studying whether additives increase or decrease the stability of emulsions. The astronauts also investigated microgravity-induced changes in the human immune system similar to aging, tested a novel water-reclamation membrane, and examined a concrete alternative made with a material found in lunar and Martian dust.

The spacecraft, named Freedom by Crew-4, will return to Florida for inspection and processing at SpaceX’s Dragon Lair, where teams will examine the spacecraft’s data and performance throughout the flight.

The Crew-4 flight is part of NASA’s Commercial Crew Program and its return to Earth follows on the heels of NASA’s SpaceX Crew-5 launch, which docked to the station Oct. 6, beginning another science expedition.

The goal of NASA’s Commercial Crew Program is safe, reliable, and cost-effective transportation to and from the International Space Station. This already has provided additional research time and has increased the opportunity for discovery aboard humanity’s microgravity testbed for exploration, including helping NASA prepare for human exploration of the Moon and Mars.